I will be in Philly in my capacity as a . . . well . . . I don’t know. As someone who is Mighty. Automattic is sending me, but I have no idea what I’ll be doing. Maybe helping at their Happiness Bar, maybe taking photos. Maybe schlepping things all over the place. But no matter what, it’s going to be awesome and you should definitely come! 🙂

We’re less than a month away from the inaugural WordCamp US, the largest WordPress conference in the world. Join us in Philadelphia for two days of informative sessions and stimulating conversations with everyone from blogging newbies to the most experienced WordPress developers in the world. WCUS will be on December 4–5 (with Contributor Day on the 6th), in Center City at the Pennsylvania Convention Center.

In previous years, WordCamp San Francisco has acted as the official annual WordPress conference, where WordPress co-founder Matt Mullenweg gives the “State of the Word,” sharing the latest WordPress developments, answering questions from the audience, and offering his thoughts on what’s next for WordPress — and the future of the web. This year’s “State of the Word” will happen at WCUS! 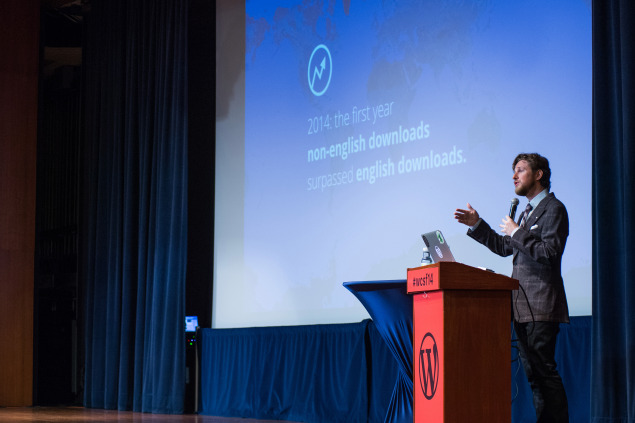 Matt Mullenweg at WordCamp SF in 2014. Image by Sheri Bigelow.

I’m testing a pretty awesome app and what better way than by posting a bunch of baby-grins?

I have blogged (briefly) about the HPV vaccine and how utterly necessary it is.

Here’s a bit more on the topic from one of my favourite blogs.

‘Consider, for instance, the human papillomavirus (HPV). HPV is now the most common sexually transmitted disease in the United States. The virus infects over half the American population and causes nearly five thousand women to die each year from cervical cancer; the Centers for Disease Control (CDC) estimates that more than two hundred thousand die worldwide. We now have a vaccine for HPV that appears to be both safe and effective. The vaccine produced 100 percent immunity in the six thousand women who received it as part of a clinical trial. And yet, Christian conservatives in our government have resisted a vaccination program on the grounds that HPV is a valuable impediment to premarital sex. These pious men and women want to preserve cervical cancer as an incentive toward abstinence, even if it sacrifices the lives of thousands of women each year.

There is nothing wrong with encouraging teens to…

I know that the typical season for posting First Day of School photos is early autumn, but my son just turned 2 on January 1st (yeah, he’s a New Years baby) and so he only just started his very first day at Pre-School today.

Wow. How amazing is that? I would willingly swear on anything you asked for that he was born just a month ago. Last week he said his first word (“dada,” naturally). He only took his first steps yesterday.

I have no doubt that tomorrow I’ll be teaching him to drive (while using every trick at my disposal to seem as calm as possible) and next week I’ll be watching him graduate from college.

As you know, I work at Automattic (the folks behind WordPress.com) and this is something that we’ve been working on for a LONG time now. Hope you like what you find on your sites going forward . . . it’s a whole new world!

Last week, we announced a few updates to the WordPress.com interface, including faster stats and enhanced site management on both desktop and mobile devices.

Our push to make all WordPress.com sites faster and easier to access and manage continues. This week, we’re thrilled to unveil a few brand-new features that allow bloggers, publishers, and business owners to run their sites and manage their content from one central hub, no matter what device they’re using.

From new blog post and page management tools to Jetpack site integrations, we hope you enjoy the latest additions as much as we do!

You can now access all your posts from one convenient location, whether you write one personal blog or publish on multiple sites. Quickly sort through published, scheduled, drafted, or even trashed posts for one or all of your sites at once!

A visual preview of each blog post lets you…

With a floating island of garbage of unmeasurable size, most of which is made of plastic, just bobbing around in the Pacific ocean; you can’t help but think long and hard before buying yet another disposable plastic bottle of water. Certainly before you just throw it away instead of recycling it.

Right now I’m in Austin, Texas, at the IMFCon (the International Music and Film Conference) for work, and these are being handed out instead of bottles of water. I cannot tell you how much I hope to see them catch on:

ceramic vases stand sentinel
cloying scent of lilies heavy, sweet
petals dropping like tears
loved me, loved you
loved her
forming drifts around
carefully typed words
inadequately embossed on stiff little cards
until the transient well wishes
can be borne no longer
and the detritus is cleared away
the cheerful reminders of death
stowed neatly beneath the sink
counters cleared of
thinking of you
ten tiny fingers, ten perfect toes
suspended in black and white
replaced by a grocery list
as normal begins to smooth broken edges
of life held together by grief
until from a distance
it looks whole again; fractured but solid
save for the space
that fits the shape of her exactly

This image has been making it’s rounds A LOT over the last couple of days.  Understandable since Google has just released such a seminal new Social Networking site, Google+, the first that has any hope of standing up against the current heavyweight champion of the world, Facebook.

Now in the interest of full disclosure, I’ve been a user of Google products since they came out, including Google+.  Not all products by any means (I couldn’t even tell you what practical purpose half of them even HAVE), but I certainly run my email through Google Apps and I literally would not know where I was supposed to be each day without gCal.  In the interest of FURTHER disclosure, I woke up out of a sound sleep and jumped out of bed to write this post (how’s that for a visual for you), so you’ll have to forgive any mental leaps which may occur . . . but I feel y’all need to hear the ranting that was taking place in my head.

But here’s the thing.  If you are the type of person who is concerned about Internet Privacy (and man are there a lot of you out there), then you probably shouldn’t be on social networking sites in the first place.  If you’re REALLY that concerned, you should probably ALSO be running your email through your own dedicated server (which is in your house) and your internet through a Tor network.

You also have other problems.  No, I’m not being snide, I’m saying that datamining is the next big thing and you’re going to need to cancel your weekend plans.  You need to start hitting up sites like spokeo.com and getting your data removed, because there is WAY more scary stuff just out there floating on the Interwebz.

That said, if you’re not quite that far gone, consider this.  Who would you rather entrust your personal data with?  A company which, when they make mistakes (and do not misunderstand, ANY AND ALL COMPANIES WILL MAKE MISTAKES) admits to it themselves — even if it sometimes takes a bit.  Or a company which is run by a guy who’s employees say doesn’t believe in privacy at all?  The same guy who says privacy concerns are just anxiety people get over?  The company where, at least up until 18 months ago, employees could access everything in your account (and I mean EVERYTHING)?

So I guess the question is, who do you trust more with privacy concerns?

A large corporation which you know has its hands in everything and is probably going to try and sell you something with targeted marketing . . . but at least it’s all completely automated and scripted and being perpetrated by a group who’s company motto is “Don’t be evil?”

Or a company which has had nothing BUT privacy concerns which has been run by a guy who you can’t block within his own social network if you find him unctuous and unpleasant?

Like I said at the beginning, I admit to being rather pro-Google.  Believe it or not, I don’t have active plans on shutting down my Facebook account any time soon now that G+ is up and running.  Nothing so drastic.  But the fact that there is actually competition gives me smiles.

P.S.  If you really ARE genuinely a privacy buff, give Google+ a try.  I think you’ll love “Circles.”  You specify for every post you make just who sees what you’re doing.  Absolutely no one else sees it.  It’s almost hard to grasp how much more of a lockdown it is.  You can actually have work on your friends list!  Wow.

I figured out why I haven’t been sleeping too well.

It’s because it’s been during the fucking day time!!

I actually spent the weekend with a normal person’s sleep schedule and found that I was sleeping all the way through the sleep cycle (8 plus hours.  Totally unheard of for the last several weeks), and sleeping quite well too.  It was glorious.

Also of note?  Against all odds, I’m healthy.  That issue I was concerned about was that I was worried that I had the Wilford Brimleys (die-uh-bee-tuss).  So, I did indeed go in to the doctor and got roughly one-third of my blood taken.  From that however, it was discovered that my blood sugar levels were fine (which is great) but also that so were my triglycerides, my bad cholesterol and pretty much everything else except my “good” cholesterol which was just a little bit low (which just means I need to exercise more).

So that, needless to say, is pretty awesome.  Just thought I would share.

Or Third Shift.  Whatever.

Yes, yes, you heard correctly, I once again have found myself confined to the lightless realms of third shift.  What did I do to earn myself this punishment, you ask?  Nothing bad!  I swear!

In fact, I guess you could say in a way that I asked for it.  I applied to be a Lead for my department.  While I’ve held that position title before at GD, it was on the floor and was just a stepping stone on the road to being a Supervisor, in this department (where there are no actual Supervisors), it actually fills that role.

SO, I once again find myself in a situation wherein I am responsible for the productivity of others and am answering questions, etc.  It’s interesting, that’s for certain.  It is taking me a bit of time to get used to making decisions for others again (as opposed to only having to be answerable to myself, which was nice).

I will also tell you for free that I’m not adjusting as well to third shift again as I usually do.  At first I thought that it was just that I had spent so little time on First and I had been so burned out that I wasn’t truly RESTED, but now I’m concerned that there may be a health issue or something.  I’m actually manning up and facing my White Coat Syndrome and will be going to the doctor tomorrow morning after work to get some tests run so that I can establish what the hell (if anything) is wrong with me.  Wish me luck.

And that’s pretty much all I’ve got.  Sorry it took so long to write and I do not at all promise to write more frequently, since nobody reads this anyway.