Last night, Kendra and I attended our first ever political rally.

It’s not that I don’t have what you would describe as a political bent, I just learned from a fairly early age to keep it to myself.

You see, my family has always been incredibly political in nature. My grandfather served in the United States House of Representatives for 30 years (retiring when I was a toddler) and my uncle took his seat when I was in grade school. But they were both staunchly conservative Republicans, though from an age when bipartisanship was seen as a leadership trait and the idea of shutting down the government in a fit of pique was . . . well . . . it wasn’t even an idea. Because who would do such a bat-shit insane thing?!

Anyway. When you grow up in such a family, when you have both social and economically left leanings you keep your mouth shut or risk facing the ever-dreaded look of disapproval not just from said grandfather, but worse yet . . . from your grandmother.

I never hesitated to vote my conscience, but I did so relatively quietly. Last night however, we went and saw the first candidate for President of the United States of America that was exciting enough to get my deeply apolitical wife — a wife who always voted her conscience as well but who also did so quietly more out of a desire to just not get in to an argument with anyone over a topic about which she wasn’t passionate — to get her to a rally on a precious Saturday night sans children was an amazing thing.

Even though he had his largest turnout of any rally thus far (over 11,000 . . . larger even then Trump’s disproved claim of 10,000), and in a deeply Red State no less, there hasn’t been a whole ton of news coverage about Bernie Sanders‘ event last night (Time’s is getting reposted a lot, though). It’s a shame too, because the man can really work a crowd. Like any rally I’ve watched on telly, Bernie’s speech was fairly long on promises and short on details . . . but those promises speak to literally every point which are on my checklist for a candidate.

If you are reading this blog and wondering who the hell Bernie Sanders is (a lot of the problem is that he doesn’t have a lot of name recognition outside of Vermont and various corners of the Internet), then you can read this simple one-paragraph-each breakdown (via PBS) of his record on 10 of the most common issues, from the environment to immigration. I think what makes him so dramatically left wing and radical is that he wants to provide for this nation things that other countries, countries which are not nearly as rich or as advanced as we are, have had for years. Sometimes decades.

Again, these are things which workers in every other developed and several developing countries already have. That we do not is just ridiculous. That only one candidate is talking about their lack is ludicrous.

That’s why Bernie is my candidate. 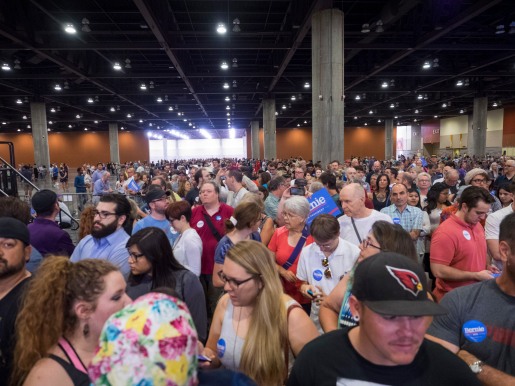 We had well over 11,000 attendees. The hall wasn’t even half filled at this point. 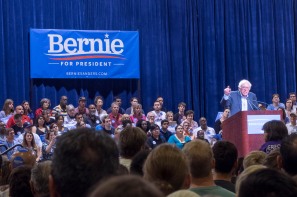 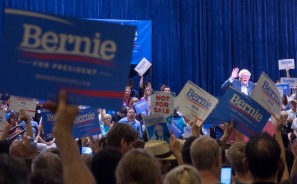 A lot of the rally I just saw a bunch of Bernie signs being waved.

A whole ton of people watched the whole rally this way.