This past weekend I had the opportunity to participate and volunteer at the Inaugural WordCamp US in Philadelphia, which is a nation-wide conference for developers of, professionals who work with, and major fans of the software which runs 25% of the Internet . . . WordPress.

It was by no means my first WordCamp, which are held regularly all over the world, but it was my first national-level WC. Before WCUS, the main national WordCamp in the United States has been held in San Francisco each of the previous 9 years and I had never managed to make it, much to my regret. I was so excited to finally get to attend this gathering of people who make WordPress such a huge part of their lives . . . and it didn’t disappoint in the slightest!

I flew to Philadelphia via Denver, which is only important in that there are quite a few Automatticians who also flew out of DIA, so it was like a miniature meetup at my gate. It was fantastic getting the chance to sit and talk to so many people that I don’t get to interact with very often (which is always something I come to reflect on during any Automattic trip, and is one of the few downsides of working remotely). When I arrived, I had just enough time to relax a bit before a pre-party at a “nearby” Hard Rock Cafe.

Nearby is in quotes because I (foolishly?) went in a group which was being guided by a coworker of mine, Spencer. Spencer lived in Philadelphia at some time in the past and said he knew where he was going.

He was very confident the entire way that no, we were not lost.

As someone who is good at bullshitting, I should have seen through it immediately. I later discovered that our 3 mile or so walk could have been about 1/2 a mile. But hey, I got to see a lot of Center City, Philadelphia at night! 🙂

The next day was the first one of the proper WordCamp (there was a Community Summit which had happened for two days prior, but I did not attend). I helped out wherever I was needed: I did registration, I showed people around. I helped out at our Happiness Bar. I made fun of some of my ex-coworkers at GoDaddy. All very important and vital work! In fact, when the WordCamp site stopped responding; I got my geek on, did some digs, a reverse IP lookup or two, and figured out exactly who we needed to yell at to get things up and running again . . . so I basically saved the day (Note: I in no way saved the day).

It was during lunch on that first day that I ditched out of the conference and went to the Reading Terminal Market in hunt of a proper cheesesteak. The place reminded me of a few different enormous food courts I have seen in my travels, like La Boqueria in Barcelona. I managed to get my hands on a cheesesteak, but I was sucked in by the insistence of others that I get it “wit whiz.” Now don’t get me wrong, I have had the fake cheese on any number of cheesesteaks and so knew what to expect, but this place really short changed me on it, so I ended up with basically an orange bun and a grilled meat sandwich (I don’t do peppers and I’m allergic to onions). I definitely should have gone with some proper cheese!

But I digress (and am now hungry).

That first day I didn’t manage to make it to any talks. Too much helping to do! But the next day, things were much more settled and I managed to catch a few and I’m so glad I did. Some really great talks about managing CSS at scale (probably 80%+ of which went over my head, but it was still great stuff!), talks on how WordPress.com is being used to archive collections at the Smithsonian (wow!), and a variety of other lightning talks (short talks delivered in 10 minutes or less).

And then finally, of course, the State of the Word. 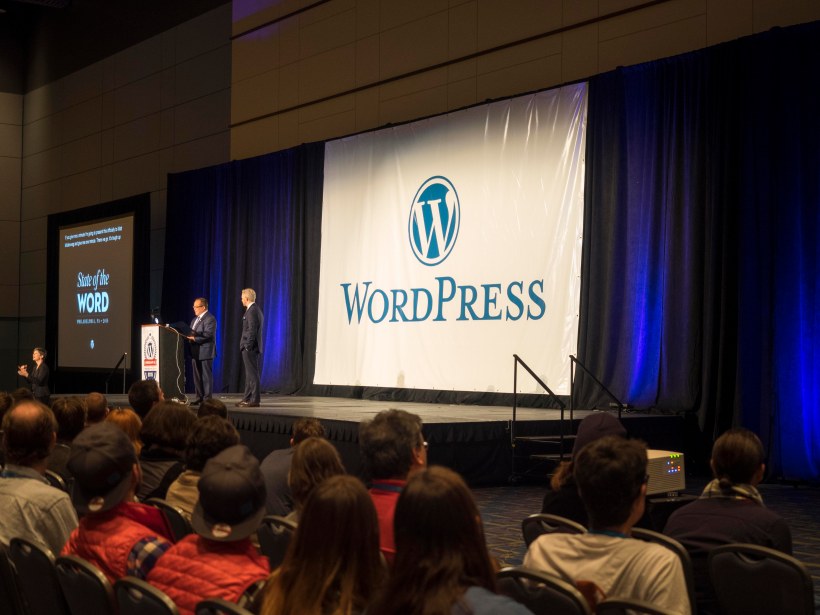 An annual speech given by my boss and the founder of WordPress, Matt Mullenweg, wherein he talked about everything from the recent release of Calypso, to our new Mac app, all the way to talking about the importance of encrypting the web.

The @EFF, @automattic, and others leading the way to curtail passive government surveillance. #proud #WCUS pic.twitter.com/1LPKoqTVqF

After the State of the Word there was a pretty epic afterparty at a local bowling alley which I hear was amazing, but I sadly did not go. I had developed a pretty killer headache and had to catch a flight early the next morning, so I gave it a pass. I’m sorry I did though because the photos which my friends have posted look like they had a blast!

So that was my time at (my hopefully first!) WCUS. If you get the opportunity you should absolutely attend! It’s going to be in Philly again next year from December 2 – 4th. Sadly I won’t be able to go next time around, as my Dad will be turning . . . well . . . let’s just say old. He’ll be turning OLD. 😉