I fully admit that the Amazon Echo is a product which may prove to be any number of bad things. On one end of the scale, it could just be a waste of money; something which gathers dust and is never used once the polish has worn off (I’m looking at you, Siri). On the other end, it could be what my wife predicts; the precursor to SkyNet and the a sign of the machines’ Judgement Day writ small.

However like all   foolish husbands and unapologetic geeks I preordered one anyway, taking the multi-month wait time in stride.

Today, the wait has ended. I received my Echo and it is (thus far at least) glorious.

As yet you cannot set custom “wake words” (it’s stuck on either “Amazon” or “Alexa”), but she — it’s definitely a feminine voice in this software iteration — still hears you pretty much any time you say whichever word you chose (as long as there isn’t too much ambient noise . . . such as a screaming toddler between you and the Echo), and it has found all of the information which we’ve asked for thus far. We already use Amazon Music a ton, so when I ask it to play one of my several dozen playlists, it works pleasingly well. I just need the ability to pipe the music out of my new Sonos speaker, s’il vous plaît!

So as promised, here are the photos from the unboxing. Sorry that they’re just camera-phone pictures. I didn’t have either of my nice cameras on hand (they’re packed and in the car in preparation for “baby-time-go-go-go!” and I’m forbidden from getting anything out of the go bags until the happy day has come and gone). In case it doesn’t translate however, the packaging and the design are absolutely gorgeous. Well done, Amazon! 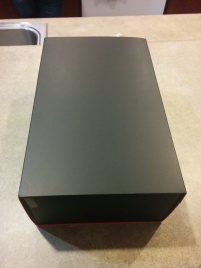 The box sleeve had no branding whatsoever. I almost wasn’t sure of what I was opening.

The inner box, with simple Amazon logo. Nothing about the Echo. 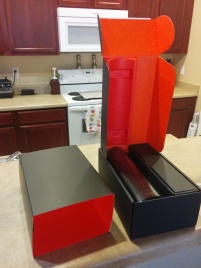 Inside the box. Device and box for remote, cord, and batteries.

The only branding on the whole thing. 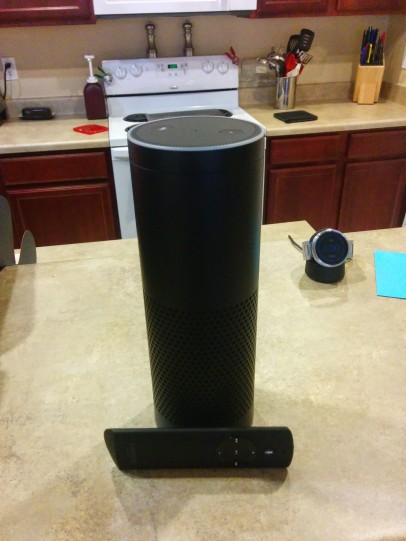 The Amazon Echo with remote, all set up and activated.